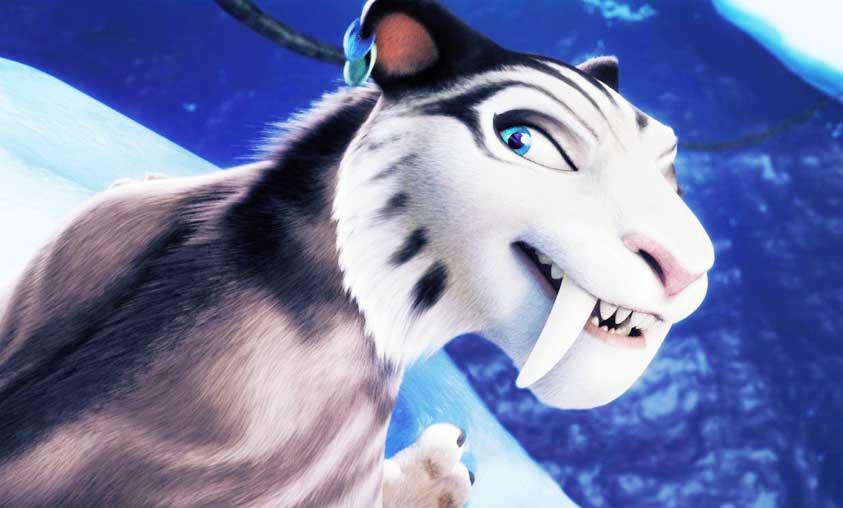 Shira ran away from her “pack” to find a new home, and joined up with a merry gang of pirates. She is quick to leap into action and aggressive in how she first brings down Diego. When she later escapes (after chewing and clawing her way out of her “cell”), she uses her environment to trip up Diego so he cannot catch her by knocking into things on purpose to scatter them in his path (a tree trunk). She pulls the same stunt with her ex-boss, the pirate king, to help Diego and his friends escape, when she scatters ice into his path, which cases him to fall. She also changes her mind instantly – when Diego asks her to join them, a pack that genuinely cares about each other (unlike her pirate kin, who didn’t even come looking for her), Shira only has a moment’s hesitation before she agrees. She is athletic and proactive, taking advantage of any opportunity to escape or to act decisively. Though she covers up her true feelings with bluster, Shira ultimately makes an emotional decision – to find a pack that truly cares about her, rather than one that doesn’t. She likes Diego, but doesn’t really talk about it, so much as she acts on it. She mocks other people’s dependencies to cover up her own feelings, but really just wants to find acceptance. Shira makes up her mind based on the facts; when Diego points out to her that her loyalty is misplaced to the pirate king because he didn’t come looking for her, she recognizes that he is right and immediately does something about it, by changing sides. Though her initial belief was she would be a pirate for the rest of her life, once she meets Diego and sees what her life could be like, Shira can imagine a different destiny for herself, but she struggled to see the truth about her boss, or even about herself and her own needs.

Shira puts on an aggressive front to intimidate people, but is rather soft underneath. She and Diego antagonize each other at first and then fall in love, but they are different in their levels of independence. As Diego points out, he didn’t separate from his pack and run off and find another one, like she did. She has been searching for a home, a place to belong, and wherever that is, she gives her leader her submission and total loyalty until he proves undeserving. She initially wants to go back to him, even though he doesn’t deserve her service (he didn’t care when he thought she might be dead)… but when Diego promises her a better, happier life in a family that cares about each other, she abandons her old life to embrace this one, transferring her loyalty to a “new” group. She is somewhat guarded and distrustful, but also adventurous and even funny. She uses her 7 wing to be sarcastic and critical of other people’s absurdities, and to imagine a new life for herself outside what she has known up until now—one with Diego!

This character was typed for a reader, per their paid request.