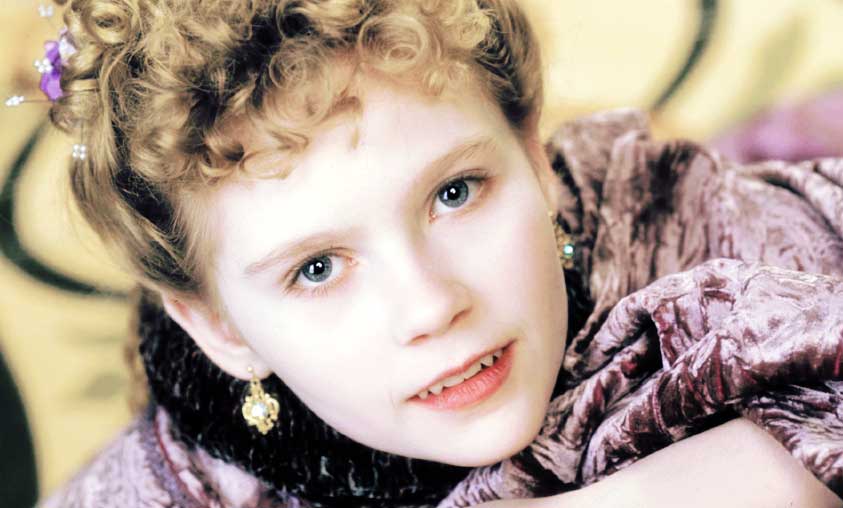 Claudia lives mostly for the moment, as observed in her childhood impulses – she has a ravenous hunger and is indiscriminate in where she feeds, thinking no more about tomorrow than beyond this moment. Together, Louis says, she and Lestat finished off entire families. A pinprick on her seamstress leads to draining her dry; she also kills her piano teacher, a doll maker, and various people by luring them in off the street to feel sympathy for her. Lestat warns her to be more careful, lest she expose them or contaminate their environment, but she simply doesn’t care. Claudia sees and wants to become a voluptuous and sensual woman; when she realizes she cannot have this, she entices and kills that woman, then leaves her to rot in her room to punish Lestat. She’s incredibly opportunistic and quick to react; very shortly after her terrible quarrel with Lestat, she decides to kill him and takes immediate steps to find two children, drug them with laudanum, kill them, and trick Lestat into drinking their blood. She then slits his throat and has Louis throw his body into a swamp. When he comes seeking revenge, she and Louis escape abroad, where she gives in to her many sensual desires (purchasing gowns, going to the theater, enjoying the night life, and dancing until dawn). Claudia is highly emotional and follows her impulses wherever they lead; she’s also easily offended. It angers her that she will never grow up and she rightfully blames Lestat for having done this to her, reasoning that Louis has spoken to her of his family, so he must have been mortal before Lestat. She hates Lestat so much, she destroys him, then can’t understand Louis’ anguish and rage over what she has done. As soon as she fears Louis might leave her, Claudia goes out into Paris and finds a woman who has lost her daughter, then convinces her become a vampire so she will have a companion. She often acts immediately, for decisive ends – to kill Lestat for what he did to her and Louis, or in removing herself and Louis from Armand’s presence when she senses him as a threat. She realizes she cannot survive without her companions, so forgives Louis for his role in her death and becoming an immoral, saying they are “locked together in hatred.” Claudia tells Louis that Armand spoke to her without words, and she understood his soul – she senses that he wants Louis and would endanger her to get him. She is insightful into Armand, sensing him as a threat and the attraction between him and Louis, but it took her thirty years to wonder where she came from, how she came to be, to notice she has not changed, and to ask questions about Louis giving her a doll “always on the same night of the year.” She also doesn’t think about the consequences of her early actions – who will finish her dress, teach her to play the piano, or whether people might notice bodies piling up around her. Once Louis meets Armand, Claudia becomes paranoid and obsessive about protecting herself for the future, by gaining a new companion out of the certainty that Louis will abandon her.

Claudia sees absolutely no reason to check any of her impulses. She feeds on whomever she likes, whenever she likes, and engages in aggressive tactics with Lestat for dominance. She hates that he dresses her up and treats her like a doll, and has hedonistic tantrums in which she kills and leaves women to rot in her bed, chops off all her hair, screams at him and Louis, and even strikes Lestat across the face, drawing blood as she demands to know “which one of you did this to me!” When it becomes apparent that Lestat is to blame for the fact that she will never mature in body as she has done so in mind, Claudia decides it’s time to “leave him,” and manipulates him into drinking dead blood so she can slit his throat. She sees Armand as a rival, and believes Louis is going to leave her, so she demands he create a protector and companion for her, so she won’t be alone. Claudia tries to rationalize away all of her callous decisions, saying Lestat deserved it. She has a great many “impulses” that Louis gives into without complaint, as she enjoys the finer things in life and takes whatever she wants.

Edwina lives in emotional isolation from the other girls at the school; she deeply internalizes her feelings and chooses to act on them, sometimes without the approval of others (which she does not feel she needs). The most glaring example of this is after McBurney ‘goes crazy’ and threatens them all with violence; she quietly goes up to his room, and tries to comfort him without words / winds up sleeping with him, because his actions matter less to her than her intense affectionate bond. She is very concerned with how she appears, how she conducts herself, and becomes competitive in seeking McBurney’s affections. Edwina acts on her impulses, and has a natural tendency toward physical confidence in daily interactions (she is quick to act, decisive, assumes McBurney will come to her, and makes herself pretty for him) and toward violence: she becomes so angry at him, she throws him down the stairs. She often becomes fixated on single conclusions (her heart sets on McBurney, and she sees in him a way “out of her life”) but is not always quick to guess others’ motivations. Her inferior Te shows in how she acts on her feelings, and the harsh words she sometimes employs with the other students (she tells off one of them for ‘stealing’ her earrings and wearing them without permission, she is a teacher at the school who tries to keep the girls in line) as well as a lack of interest in considering the rational implications of her actions (being in love with this man could cause endless problems, ruin her reputation, and land her pregnant with an illegitimate child).

Edwina is a quiet and gentle woman who doesn’t want anyone upset with her, who tries to respect Martha’s wishes, but also wants to follow her heart. Even though she longs to travel and see the world, she has done nothing to make this real. It’s something she dreams about, but she feels stuck and frustrated in her life. She immediately becomes attached to McBurney and convinced that she loves him, and merges into his desires and wishes, going out of her way to attract him and side with him, even after he becomes a threat to the other girls. His wishes become hers, and hers become his. She denies that she cares what others think about her, yet is somewhat self-conscious and deferential. Yet, she also has a quick temper at times, and confronts the other girls about stealing from her room, borrowing her earrings (to be attractive) without her permission, etc., and is defiant toward Martha when it comes to falling in love and supporting a potentially dangerous man.

“He’s saved my life twice and I’ve never even seen his face.”

MJ often will sacrifice herself to the moment, whether for the good or ill. She takes the opportunity to thank Spider-Man with an upside-down kiss in a darkened alley after he has saved her life… but she also accepts a proposal from a man she does not love, simply because he asked and it ‘seems right.’ Yet, Mary Jane is never quite sure, and always itching for something else… Peter. That’s what her heart wants, but their timing always seems to be wrong. She cannot understand why he won’t be with her, and he cannot tell her why. MJ likes to be the center of attention and in the spotlight; she enjoys being on a billboard, even though she says it’s also a little embarrassing. She thrives when her audience loves her on the stage. And she is quick-thinking enough to act in her own defense, on the many occasions she is kidnapped by a villain who intends to torture Peter. She tries to assault Doc Ock with a board, and she manages to save herself from being crushed by a falling taxi cab when caught in Venom’s web. Though Peter’s true identity catches her off guard, she admits that “somewhere deep inside… I knew it was you.” MJ tends to lean away from things when she is not sure of them, and “almost-start” relationships with other men. When she has doubts and frustrations about and with Peter, she winds up kissing Harry. When she was originally with Harry, she was longing for Peter… or for Spider-Man. But once she makes up her mind, MJ acts decisively, based on her own feelings and no one else’s. She leaves her groom at the altar and runs to Peter’s apartment. She storms out of a restaurant when Peter is too self-absorbed to listen to her problems (“This isn’t about you, Peter… it’s about me!”). She is easily hurt by criticism and rejection, but also willing to forgive.

MJ grew up listening to her father tell her she’s worthless, untalented, and will never make anything of herself—so she works hard to become an actress, and is ashamed to admit she’s just waitressing tables or working in a jazz club as a singing waitress. It upsets her when she thinks Peter might have overheard her parents’ nasty argument. She’s insecure and upset when Harry doesn’t stand up to his father about their relationship at Thanksgiving dinner. She tries to ignore bad reviews, but they still chip away at her sense of self-worth, and she falls into a 9ish depression and apathy, gives up on her career, and ‘settles’ for what will pay the rent. Her 4 wing is forever searching for what she does not have, rather than focusing on what she has. When she’s with one man, she pines for another… and the cycle repeats itself, with MJ always moving toward anyone who can offer her love and attention, but she will also hold them at a distance until she senses they no longer want her. Then she moves toward them again.